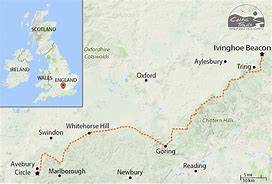 The Ridgeway National Trail a walking route in a surprisingly remote part of southern central England. It travels in a northeasterly direction for 87 miles (139 Km) from its start in the World Heritage Site of Avebury. As Britain’s oldest road The Ridgeway still follows the same route over the high ground used since prehistoric times by travellers, herdsmen and soldiers.

West of the River Thames, The Ridgeway is a broad track passing through the North Wessex Downs Area of Outstanding Natural Beauty (AONB) and is often quite a distance from villages or towns. Here you’ll experience wide, open views of rolling chalk downland and find many archaeological monuments close to the Trail including Stone Age long barrows, Bronze Age round barrows, Iron Age forts and the figures of white horses cut into the chalk. East of the Thames, The Ridgeway travels through the more-wooded and intimate hills and valleys of the Chilterns AONB where, as well as further archaeological treasures, there are several nature reserves rich in the wildlife found in chalk grassland habitats. In the Chilterns, The Ridgeway goes close to or through several villages and small towns where refreshments and other facilities are easily available.